The recent thread on Ceramic jars with foil plugs got me thinking about metal canisters and ceramic storage jars.

Aesthetics aside, any opinions as to the superiority of tea storage in metal canisters or ceramic jars?  Feel that a particular tea is better suited for one or the other?

My collection currently runs about half and half.  As a collage student, I like the durability of metal canisters.  And the double seals on metal canisters, assuming everything fits well, are great.  But I find myself putting my favorite teas in ceramic jars.  It just feels better, although I can't pin down why I think that way.

I like ceramic and earthenware jars better overall. I have a bunch of metal tins too, but I do find that sometimes they seem to impart a bit of a metal taste, especially the cheaper ones. Also, some of the cheap stainless steel ones aren't completely airtight at the seams - I notice water leaking when I rinse them. The Ten Ren metal ones seem Ok as long as you go to the store and pick out ones that are tight enough (but not too tight). The Beehouse brand ceramic ones with a silicon seal are good when you want a better seal. Some of the knock-offs are a lot cheaper, but somehow I don't like them quite as much.

The ceramic ones w/ foil plugs really seem to vary in terms of how well they seal. I have some that have a pretty loose seal, and I usually only use those for high-fire teas. On a couple, with really bad fitting lids, I took the foil off completely, and just put some butcher paper on there. I use it to store stuff that I don't want airtight at all, like pu'er that I've broken up. I have a few ginger jar style tea jars that also have no seal; I use those for the same sorts of things.

I've been experimenting with storing some high fire Taiwanese oolong in a couple of large yixing (or yixing style) canisters w/ wax around the top. They're unglazed, so I'm not sure whether any moisture will be able to make it through the somewhat porous earthenware. I kept a couple samples in vacuum packed foil bags just to compare with later.

Recently, I've been doing a lot more re-sealing of bags and / or using those little clips that let you re-close a normal (high quality) mylar / foil tea bag. Of course, if you use a bad quality (too thin and / or smelly) mylar tea bag, it's probably one of the worst things you can do.

ps - I'm mostly talking about the common stainless steel or cheap (and thin) food-grade tin ones. The old Chinese tin (or lead? the really heavy / thick ones; they definitely contain at least some lead) and pewter ones should be much preferable to the stainless steel ones, especially in terms of air-tightness. I'm not sure if the lead is a safety concern; probably not a huge one, and it is great at creating an airtight barrier.

I've been experimenting with storing some high fire Taiwanese oolong in a couple of large yixing (or yixing style) canisters w/ wax around the top. They're unglazed, so I'm not sure whether any moisture will be able to make it through the somewhat porous earthenware. I kept a couple samples in vacuum packed foil bags just to compare with later.

Could you put up some photos of the canisters and explain how you made the seal. I would be interested in what sort of wax you used as well.

They're not that exciting or great - they're from Rishi, and made by 经典陶坊; hold about 600g or so. They have a little bit of an odd smell, like some of those pots do when they first arrive. I boiled water and tea leaves in them a few times, let them dry for several days, and also tried leaving some charcoal and dry tea leaves inside. The tea is some super high fire Taiwanese high mountain oolong from a local shop that's cheap enough to experiment with, and that I think will taste Ok after it rests for a while (I think I sent you a sample of one of them). 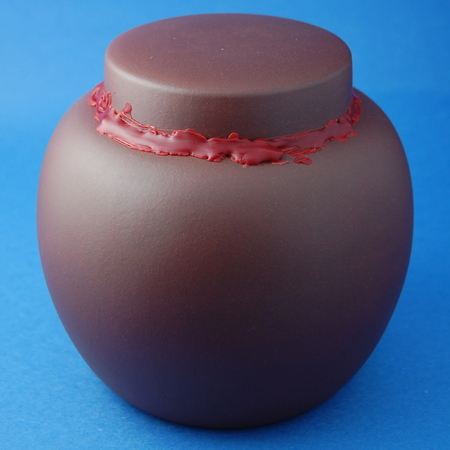 I think I got the suggestion to use sealing wax rather than candle wax in the comments of:
http://teamasters.blogspot.com/2008/02/ … n-jar.html

I don't have a good picture, but the coolest looking jars of this sort are the huge, kind of rustic, Taiwanese ones used for aging oolong, usually some sort of local earthenware with a glaze over it. The lid is usually sealed with some combination of cork, wax, and cloth that's sort of like those Japanese towels given out as gifts.

I used a hot melt glue gun with sealing wax. It was a little tricky, and my first attempts failed miserably; the wax didn't seem to bond well when I tried to apply it around the edge. So instead, I (as quickly as possible) put a layer of wax around the rim and pressed the lid down, then did a thin layer of wax around the edge. That seemed to work better. It seems to be an ok seal, but it would be really easy to break. Doesn't look as nice as I had hoped, but it's functional.

Note: if I didn't live somewhere fairly dry, and wasn't using a high-fired tea, I probably wouldn't be doing this experiment with an unglazed jar at all.

Jason (bears3x) made me a little canister based on our various discussions that's the perfect size for aging smaller amounts of oolong, and has a little inner lip that can be filled with wax, then another layer of wax can go around the edge. 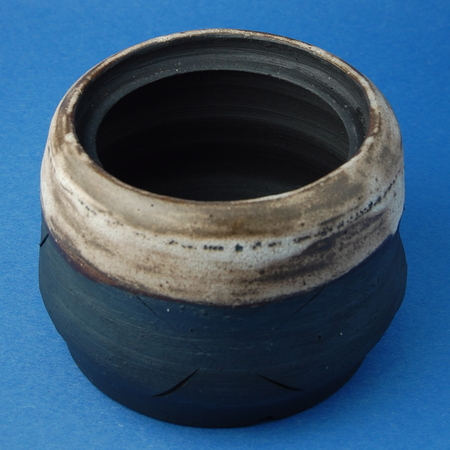 Have you tried using a glazed ceramic jar for aging? You should experiment with the same tea stored in a few different types of sealed containers... or maybe I should.

I saw the pictures of Jason's jar on his blog, and wanted to see more, thanks. Let us know what kind of tea you are going to put into it. Also, how long are you planning to keep these teas in storage, or are you seeing how it proceeds

But I find myself putting my favorite teas in ceramic jars.  It just feels better, although I can't pin down why I think that way.

I thought of a reason why ceramic is better than metal. Ceramic transfers heat slowly, and also acts as a heat sink; so especially over the long term the ceramic jar will protect your tea from sudden temperature change that could affect it adversely.

Yeah - I do tend to experiment a lot. For example, sometimes I'll store half of a tea in a metal jar and half in a ceramic jar with a not-so-tight lid.

Right now, my only "control" for this "experiment" is a couple of small sealed foil bags, but I might try to get some more to put in a glazed jar

I'm not sure what kind of tea I'm going to put it in yet. Waiting for the right tea to come along.

Probably out of my element on this one, but have you tried zen8tea? She sells machine harvested teas at a price point that would easily allow for buying a few pounds to age in different containers. Her traditional dong ding would be my own first pick for an aging experiment. I think the roast is well done, not ruining the tea's own flavors like cheap roasted TGY.